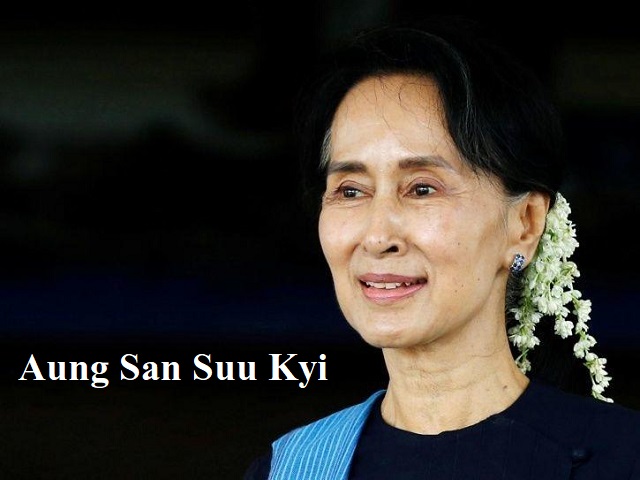 Aung San Suu Kyi Biography: Aung San Suu Kyi is a Burmese politician, diplomat, author and Nobel laureate who was sentenced to four years of imprisonment for incitement and breaching coronavirus regulations. However, the ruling military junta leaders have reduced the term of her detention to two years on grounds of humanity in her current location.

Responding to the recent verdicts related to the ousted Myanmar leader Aang Sang Suu Kyi and others, India said, “We are disturbed at the recent verdicts. As a neighbouring democracy, India has been consistently supportive of the democratic transition in Myanmar. We believe that the rule of law and the democratic process must be upheld. Any development that undermines these processes and accentuates differences is a matter of deep concern. It is our sincere hope that keeping their nation’s future in mind, efforts would be made by all sides to advance the path of dialogue.”

Through this article, let us take a look at her early life, education, and political career.

Name: Like other Burmese names, her name too doesn’t have a surname. Aung San Suu Kyi is a personal name and is derived from the names of three people– Aung San from her father, Suu from her paternal grandmother and Kyi from her mother. She is also referred to as Daw Suu (Aunt Suu) or Amay Suu (Mother Suu) by the Burmese.

Family: Her father Aung San allied with the Japanese during World War II and founded the modern Burmese army. In 1947, he negotiated Burma’s independence from the United Kingdom and was assassinated by his rivals the same year.

Aung San Suu Kyi grew up with his mother and two brothers– Aung San Lin and Aung San Oo. Aung San Lin died at the age of eight after he drowned in an ornamental lake while Aung San Oo emigrated and became a US citizen. In 1960, her mother was appointed as the Burmese ambassador to India and Nepal.

Education: Aung San Suu Kyi received her initial education at Methodist English High School (present-day Basic Education High School No. 1 Dagon). She was later admitted to the Convent of Jesus and Mary School, New Delhi. In 1964, she graduated with a degree in Politics from Lady Shri Ram College, Delhi University.

From St. Hugh’s College, Oxford, she obtained a B.A. degree in Philosophy, Politics and Economics in 1967 and an M.A. degree in Politics in 1968.  From 1985 to 1987, Aung San Suu Kyi worked towards an M.Phil. degree in Burmese literature as a research student at SOAS, the School of Oriental and African Studies, University of London.

Honorary Fellow: In 1990, she was elected as an Honorary Fellow at St. Hugh, Oxford. She was also appointed as a Fellow at the Indian Institute of Advanced Studies (IIAS) in Shimla, India.

After her graduation, Aung San Suu Kyi started living in New York City with a family friend Ma Than E, who was once a famous Burmese Pop Singer.

Death of Husband: In 1977, her husband was diagnosed with prostate cancer and died on his 53rd birthday on 27 March 1999. He last met Aung San Suu Kyi on Christmas in 1995 and only met her for five-time since 1989 (when she was first placed under house arrest). On 13 November 2010, Suu Kyi was released from house arrest.

United Nations: Aung San Suu Kyi worked at the United Nations (UN) for three years on budget matters. She also worked for the government of the Union of Burma.

Return to Burma and pro-democracy movement: In 1988, she returned to Burma to see her ailing mother and then to lead the pro-democracy movement upon the request of the people after the leader of Burma and head of the ruling party, General Ne Win, stepped down. Mass demonstrations for democracy followed, which were violently suppressed in the 8888 Uprising (18 August 1988).

First public address: On 26 August 1988, Aung San Suu Kyi addressed half a million people at a mass rally in front of the Shwedagon Pagoda and called for a democratic government. However, in September that year, a new military junta took power in Myanmar.

During the crisis, the previous democratically elected Prime Minister of Burma, U Nu initiated to form an interim government and invited opposition leaders to join him. However, Aung San Suu Kyi rejected his proposal.

1990 General Elections: In 1990, General Elections were conducted and NLD won 80% of the parliament seats. However, the results were nullified and the military refused to hand over power which resulted in an international outcry.

House Arrest: Since the beginning of her political career, Suu Kyi was placed under house arrest for a total 15 years over a 21-year period, on numerous occasions. During her house arrest, she was prevented from meeting her party supporters and international visitors. The media was not allowed to visit her during this time.

Permission to leave Burma: Once under house arrest, Suu Kyi was granted permission to leave Burma to never return– a proposal which she rejected. She stated, “As a mother, the greater sacrifice was giving up my sons, but I was always aware of the fact that others had given up more than me. I never forget that my colleagues who are in prison suffer not only physically, but mentally for their families who have no security outside- in the larger prison of Burma under authoritarian rule.”

House arrest: However, on 1 February 2021, in a pre-dawn raid, she was detained by Myanmar’s military in response to election fraud.

2003 attack: The United Nations (UN) facilitated a dialogue between the Junta and Aung San Suu Kyi. On 6 May 2002, she was released after the negotiations and was free to move. However, on 30 May 2003, a mob attacked her caravan in the northern village of Depayin– an incident similar to the 1996 attack– murdering and injuring many of her supporters. She managed to flee from the scene with the help of her driver but was arrested upon reaching Ye-U and was kept at Insein Prison in Rangoon.

Request by UN: The United Nations Working Group for Arbitrary Detention published an Opinion that Aung San Suu Kyi’s detention was deprived of liberty and in contravention of Article 9 of the Universal Declaration of Human Rights 1948, and requested Burmese authorities to set her free. However, the request was ignored at that time citing: Daw Aung San Suu Kyi has not been arrested, but has only been taken into protective custody, for her own safety.

Tax evasion: On 18 January 2007, the state-run New Light of Myanmar accused her of tax evasion for spending her Nobel Prize money outside Myanmar. After this accusation, the United Nations Security Council’s resolution to condemn Burma as a threat to international security was defeated due to strong opposition from China.

Permission to meet political allies: In November 2007, the junta officially announced on state-run TV and radio that Aung San Suu Kyi is allowed to meet her political allies of the National League for Democracy along with a Government Minister. NLD also confirmed the invitation to hold talks with her.

On 3 July 2009, UN  Secretary-General Ban Ki-moon visited Burma for the release of Aung San Suu Kyi but was disappointed after the then junta leader Than Shwe refused him to visit her, citing her ongoing trial.

On 19 August 2007, Buddhist monks took to the street to protest against high fuel prices, despite the military crackdown threat. On 22 September 2007, Aung San Suu Kyi who was still under house arrest, accepted the blessings of Buddhist monks who were marching in support of human rights, making a brief public appearance at the gate of her residence.

John Yettaw: On 3 May 2009, an American man John Yettaw, swam across Inya Lake to her house uninvited and was arrested when he made his return trip three days later. On 13 May 2009, Aung San Suu Kyi was arrested for violating the terms of her house arrest as the swimmer stayed in her house for two days. She was imprisoned at  Insein Prison. On 18 May 2009, the trial of Aung San Suu Kyi and her two maids began. On 11 August 2009, she was sentenced to imprisonment for three years with hard labour.

The main culprit: Diplomats and journalists were barred from attending the trial, however, on one occasion, diplomats from Russia, Thailand and Singapore met her along with some journalists. Days after her arrest, the national police commissioner confirmed that Yettaw was the “main culprit” in the case filed against Aung San Suu Kyi. Her arrest and trial received worldwide condemnation.

Request by the then US President: On 18 August 2009, US President Barack Obama requested Myanmar’s military leadership to set all political prisoners free.

2010 General Elections and her release

Attended the Parliament: On 18 January 2012, Aung San Suu Kyi formally registered to contest on Kawhmu Township constituency– a House of Representatives seat. On 1 April 2012, she won the seat, becoming  Leader of the Opposition in the Pyidaungsu Hluttaw. On 2 May 2012, she along with other NLD MP-elects took their oaths and took office. On 9 July 2012, she attended the Parliament for the first time as a lawmaker.

State Counsellor (2016–2021): On 20 March 2016, Aung San Suu Kyi became the Minister for the President’s Office, for Foreign Affairs, for Education and for Electric Power and Energy in President Htin Kyaw’s government. She later relinquished the latter two Ministries. President Htin Kyaw appointed her as State Counsellor, akin to Prime Minister, which was approved by both the Houses.

Amnesty to students: After accepting her role as a State Counsellor, she granted amnesty to the students who were arrested for opposing the National Education Bill. She announced the creation of the commission on Rakhine State. The Rakhine State has a long record of persecution of the Muslim Rohingya minority. However, she did not manage ethnic conflicts in Shan and Kachin states (thousand of refugees fled to China).

Ethnic Cleansing: By the year 2017, the persecution of the Rohingya by the government forces escalated. In an interview, Aung San Suu Kyi denied allegations of ethnic cleansing but also refused to grant citizenship to Rohingya and took steps to issue ID cards to them for residency.

Revocation of Peace Prize:  In 2017, critics while responding to increased violence against Rohingya Muslims and Refugees, called for her prize to be revoked, citing her silence on the issue.

George Monbiot called on the readers of The Guardian to sign a change.org petition to have Nobel Peace Prize due to her silence on the matter. However, as per the Nobel Foundation, there existed no provision for revoking a Nobel Prize.

Joe Biden Biography: All you need to know about the 46th President of the United States